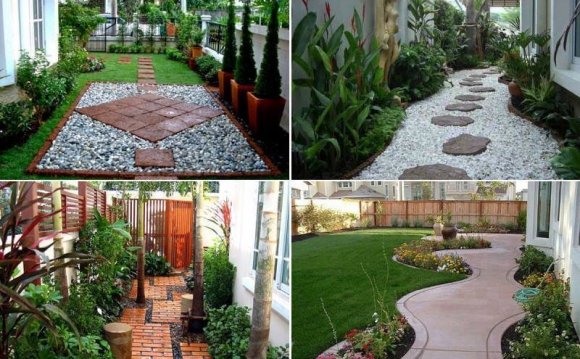 1. Break it into multiple rooms or zones. Create multiple functions by strategically using built-ins and arranging furniture to establish different "rooms" for lounging, dining, mingling and cooking. This backyard space in Brooklyn, New York, has all four zones.

2. Implement a smart lighting design. This space also has a multifaceted lighting scheme. Sconces serve multiple purposes of task lighting by the grill, landscaping lighting by the plantings and overall ambient lighting. Meanwhile, an arm pendant hangs over the dining area.

3. Extend an indoor space. Architect Carson Arthur likes to ask his clients which indoor room they feel is too small, then establish more of that space in the backyard. "Is your kitchen too small? Do you need a bigger family room? Why not do that outside?" he says. "With the development of outdoor technology, anything inside can now be done outside."

Here an outdoor rug helps establish an extra living space on a small deck in Detroit.

4. Complement your interiors.Use the same colors and style that you've already established inside your home for your backyard to make it feel more like its own living room. "Stylistically, you want to pick up on colors and textures that tie the two spaces together, " says Amber Freda, a landscape architect in New York. "Make it more than just a couple of chairs and a dining table. A plain dining table with wooden chairs won't entice you to use it very much, but really comfortable lounge seating will."

5. Play with the angles. If you've got a small square spot to deal with, San Francisco landscape architect Rich Radford suggests turning paving in a lateral direction to your property line to create more hardscape space. For the 25-foot by 30-foot backyard seen here, he shifted the paving 45 degrees to get more surface area.

6. Pay attention to scale. If you've got a small backyard, the last thing you want to do is cram in a 10-person dining table. Instead, consider built-ins or extendable tables. Likewise, you won't want to plant a tree that's going to grow to 100 feet tall and completely overtake your yard. Here Radford smartly worked in small, native plants and grasses to keep an open feel.

7. Use one surface material. If you have multifunctional areas, use one material to unify the spaces. "Small spaces need that cohesion, " says Arthur, who designed this 17-foot by 25-foot space for a family with small children. A separate play zone keeps the kids close by while the parents are entertaining, and the continuous paving ties it all together.

Radford goes even further, suggesting using the same material that's found elsewhere on the property. For one of his backyard projects, he used the same paving material as in the front entryway. "It created a unified space that made it seem bigger, " he says.

8. Avoid clutter. The more elements your yard has, the tighter it will feel. Instead, try to use built-in seating, incorporate clean lines, avoid bulky furniture and keep plantings under control. "If there's one thing that will get out of control and take over a small space, it's a plant that's too happy, " Arthur says.

Freda agrees: "Avoid the hodgepodge effect, " she says. "Instead of doing 20 little pots, do five big pots for a more clean look with bigger impact. Pick only two or three styles of planters, two or three colors - it makes it feel less accidental, chaotic and overwhelming."

To get the most out of this 25-foot by 20-foot Toronto backyard, architect Erik Calhoun created raised decks over a large tree's very high roots. He skipped big plants in favor of creating more recreation space. "Hedges or bushes would stick out 3 feet, and you wouldn't be able to move anymore, " he says.

9. Enclose the space. This may sound counterintuitive to making a small space feel larger, but it's something that might work for your space. "When you enclose a small space even more, you play up its coziness and make it intimate, something that's hard to achieve with large spaces, " Arthur says. "This also takes it to the next level of feeling like an outdoor room."

Pergolas are great for creating an intimate feel, but you can get the same effect with plantings. Architect Gary Beyerl's backyard (shown here) is 10 feet by 20 feet. Because he has apartment units attached to his home, he wanted to do something that would afford him privacy. He used vertical plantings like humongous trumpet vines and a redbud tree to create an envelope of plant material. "By extending the plant zone up the vertical surfaces of an urban space, you can make a lot of visual greenery work to your advantage, " he says. "I've got a verdant environment even though it's tiny."

10. Consider your view. If you've got an unsightly view from your backyard, Beyerl recommends using elements to control the sight line. His favorite: trellises. He used them for this Chicago home to block views to the notorious network of wires running through the city's alleys. "Trellises give you the advantage of perception, " he says. "They conceal the view but let light and breezes pass through. They're less oppressive than an actual fence."

11. Include contrast. "Always think about interesting contrast, " says Freda. Mix square and rectangular shapes with circular ones. Put spiky-leaved plants next to billowy ones. "It's visually more interesting than if everything is similar, " Freda says. "If you have a square space, I'd do square planters, but then a circular table in the middle so there's at least one counterpoint."

12. Keep maintenance to a minimum. One of the great things about small spaces is that they're easy to clean. So don't muck with this advantage! Arthur suggests using more planters rather than ground-cover soil. "Otherwise mud inevitably ends up all over your small patio space, " he says. "Containers give you the warmth of planters but are more manageable."

Native succulents and grasses minimize water use, but you should also consider artificial turf. "It maintains color and character better than a natural yard, " Beyerl says. San Francisco designer Martha Angus used artificial turf in the backyard space shown here; she also recommends faux boxwood. "A boxwood hedge might be 18 to 24 inches deep, " she says. "That takes up a lot of space. Faux boxwood comes in squares that are 3 inches deep that you can staple to a fence. They're absolutely gorgeous, don't require water and take up no room whatsoever."

13. Terrace a sloping yard. Angus' project here highlights another good method of increasing a tight backyard space. If you've got a severely sloping yard, consider terracing. Granted, terracing can be incredibly expensive, says Angus, because an extensive substructure must be created to support the terraces, but, as you can see, it provides more flat surface for activities.

14. Give it personality. Character is much more important in a small space. You want something that people will remember it by other than its size. "It's more important to drive character in a small space, " Arthur says. "You don't want guests saying, 'Oh, what a tiny backyard.' You want them to pick up on that personality of the space." Arthur suggests primary colors for not only kid elements but for funky furniture to give a space more charm. Angus suggests commissioning a local artist to do some interesting tilework on a wall or for paving.

can you buy apple keto gummies in australia