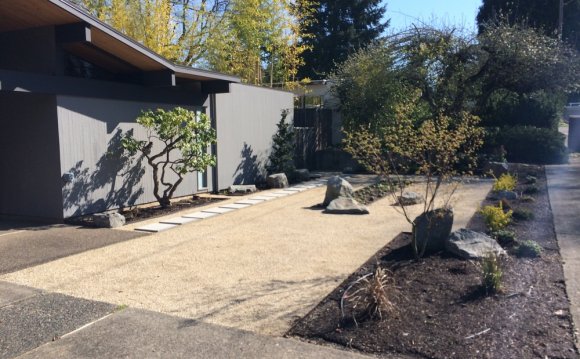 I met Ted Cleary of Ted Clearly Landscape Architecture when we both spoke at the Charlotte home show — that’s him, playing up his mad men persona, in front of the mini-Eichler he designed, installed and landscaped for the event. He and I got along famously, in fact, we were kind of a Friday night double feature: Mid-century homes inside… and out. I’ll tell you: I learned a lot about landscaping mid-century modern homes, in just one hour of listening to Ted.

When I first showed Ted’s sketch for the landscape design of this Eichler house, I promised more coverage of mid-century modern landscaping ideas. So here comes: Ted himself on some of the basics of mid-century modern design, the first in a new series of guest posts from him. I’ll feature one or two a month — pretty much as many and as fast as he can crank them out. I know this is a big “want” and “need” of many readers. In fact, after you read this first story, I’d love to hear more from you about landscaping topics you’d like to Ted him cover.

Can you start by telling us about yourself and your background in landscape design?

I’m a sole practitioner, designing and managing the construction of landscape projects for a mostly-residential clientele. After Clemson University’s five-year LA program, I followed the path of most young graduates and went to work at conventional landscape architectural firms, whose focus is typically on larger commercial projects. While these provide great experience in such technical issues as drainage and construction detailing, the reality is that the bread & butter work of most firms are conventional shopping centers and office parks and the like, where the developer is motivated to follow only the most basic landscaping requirements, rather than the sorts of cutting-edge high design praised in architectural journals.

I’ve always maintained that you could train a monkey to sit in front of a computer and stamp tree symbols on a Wal-Mart parking lot plan. I gravitated to garden design, where the “end user” is excited about really making their home their own modest version of paradise, and the opportunities to do it creatively are so much greater.

Why did you get so interested in mid-century landscape design?

All across America, we have subdivisions built in the past two to three decades filled with contemporary interpretations of French Chateaux, Arts & Crafts Bungalows, and other period, historic styles. A trait they usually share is that they’re designed with square footage as the driving factor, and often their scale, in relation to each other and to their own outdoor spaces, makes for awkward relationships.

In recent years, I believe the movement toward houses that are bigger on design quality but smaller in size has really developed a following. You can build a new home with this philosophy, but why not look for it in an existing older home with a sense of age and continuity, when there’s so much great post-war housing stock? Our parents’ generation happily raised families in these homes, under more modest conditions of space that fit better with today’s smaller families. While there are indisputable issues to deal with in an older home of energy efficiency and the like, and some interior layout changes are usually in order to make them more livable, I’ll take a cozy older home with real lap siding, true-divided-lite windows, and a lovingly maintained garden hands-down over many of today’s characterless big boxes. But, to complete this picture of domestic bliss, the outside spaces should reflect the style and period. In most cases this landscaping has ‘lost its way’ through the vagaries of time, weather, and changing tastes; I want to see it more reflective of its history.