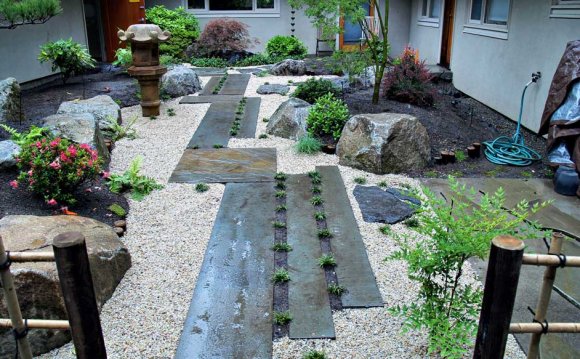 Built in honor of Sasebo, one of Albuquerque's Sister Cities.

Built in honor of Sasebo, one of Albuquerque's Sister Cities, the four-acre Sasebo Japanese Garden hosts a majestic waterfall, an elegant koi pond and a mixture of Japanese and local plants. Stone lanterns and pagoda sculptures dot the grounds and stone and wooden bridges straddle small streams.

Upon entering the garden, you'll walk past the large bell tower, through huge wooden gates, and along immaculately manicured paths. You'll be surrounded by traditional Japanese plants, along with native New Mexican trees pruned and sculpted in the Japanese aesthetic.

Just inside the gates and to the right, visitors will find the Japanese Garden's newest feature, a 'garden-within-a-garden' designed by five members of the Ogata Kai organization of Japanese landscape architects. The five architects, trained under the late Kenzo Ogata, created this beautiful garden in just four days (September 14-17, 2009).

Sasebo Garden is included with general admission to the Botanic Garden.

Docent-led Garden Tours are offered on Wednesdays at 10 a.m. and 11 a.m. dependent on volunteer availability. Tours meet at the entrance to the Japanese Garden exhibit.

How to Use Bridges in Japanese Garden Design