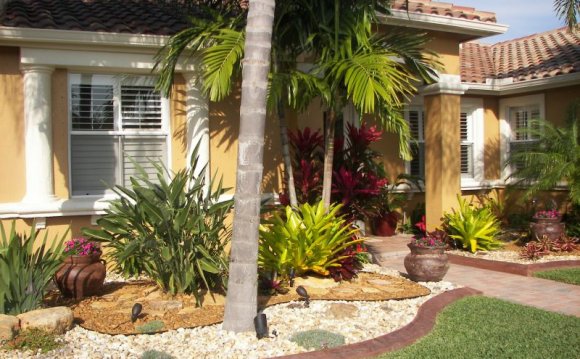 Arches cut out of massive Cuban laurel hedges are a decorative and functional leitmotif throughout the property.

Terry Rakolta has no trouble reeling off words to describe what she desired for her South Florida waterfront property, a wedge-shaped half-acre mostly swallowed up by a Mediterranean-style villa. “I wanted charming, romantic, mysterious, Old World, ” she says. “I just didn't know how to get there from a big house sitting on a lot.”

The term they use to describe their signature style—“the civilized jungle”—is also the title of a book about their work published last year by Grayson Publishing.

The distinctive arched hedges hug the sides of the swimming pool, rendering it private and a bit mysterious.

Some initial landscaping had been done in the mid-1990s, when the house was built, but Rakolta was never completely satisfied with it. A few years ago, she contacted principals Jorge Sanchez and Phil Maddux, her head filled with images of northern Italy's lake district. The eventual result was an extensive redo of hardscaping and plantings. “We removed all of the walkways and some of the plants, ” says Sanchez. “We left the swimming pool and a little terrace, but that's about it.”

The most difficult challenge was the water view. The house faces the Lake Worth lagoon, which is lovely, but the buildings on the opposite bank less so. “The view could have been either beautiful or common, depending on how it was handled, ” says Sanchez. A clever workaround was needed.

Rakolta and her husband, John, who use the property as a winter getaway (they also have homes in New York, Harbor Springs and Bloomfield Hills, Michigan, and are building a home in Aspen), often joined by their four children and four—soon to be five—grandchildren, also wanted more privacy. “Boats would anchor and look in at us, ” she says, a problem since the early days, when the new house was surrounded by a “moonscape, ” with not a single tree.

Clad in bougainvillea, a pergola tops the dining loggia. The homeowner also likes to set tables on the lawn.