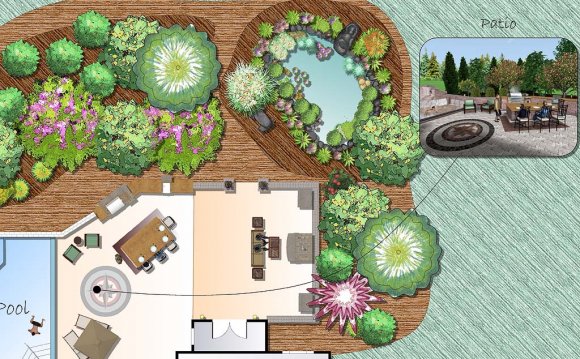 What is the primary graphic software for landscape architecture? The choice includes vector-CAD, solid-modeling, image-editing, animation, vector-GIS and raster-GIS. A true geek would learn all six types of programme - but this would leave little time to become expert in design.

CAD is probably the most widely used landscape graphic software at the present time. AutoCad, the market-leader in its field, originated as a programme for architectural draughting and has developed in many directions. There are bolt-on additions tailored for plumbing, circuit designers, structural engineers - and landscape architects. There is also a GIS bolt-on.

Landscape Architects played a major part in the development of GIS and, with a CAD bolt-on, it is likely to become the most widely used landscape graphic software. McHarg's use of overlays in Design with Nature is accorded an important place in histories of GIS. ArcInfo, the market-leader, in multi-purpose GIS software was developed by a landscape architect (Jack Dangermond). Vector-CAD uses co-ordinates and attribute tables. Raster-CAD uses images (eg aerial photographs and satellite photographs) and attribute tables.

For photo-editing work landscape architects will continue to make use of image-editing software (eg Photoshop and Photopaint). These programmes encourage exploration of photomontage as a conceptual and graphic tool.

For design, it is likely that solid-modeling and animation software (eg 3D Studio Max, Houdini, Maya and Sketchup) will become increasingly important. These programmes are a by product of the computer games and special effects industries. They allow fast representation of design ideas.

There is also a group of designers (mainly architects) with an interest in the mathematical (or computational) aspects of the design process. There have been many periods in history when mathematics have influenced design. For example: (1)entasis on the parthenon - a slight convexity to correct the visual illusion of concavity (2) Islamic patterns are essentially mathematical (3)Andrea Palladio, following Plato, believed the primary geometrical forms have profound symbolic significance (4) Bill Hillier in his work on the 'social logic of space' uses mathematics to predict pedestrian flows (5) shape grammars (expressed as algorithms) can be used to generate forms. Etymologically it is of note that the term 'algorithm' (or algorism), meaning 'a process or set of rules for machine calculation' derives from the name of an Arab mathematician al-Kuwarizm.